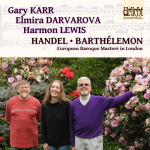 Gary Karr is the world’s leading double bass soloist — a phenomenal musician and pedagogue whose playing and teaching have revolutionized the way in which the lowest instrument in the string family is heard.

Urlicht AudioVisual is pleased to announce its first release with Gary Karr, joined by his longtime artistic collaborator Harmon Lewis and the first woman concertmaster of the MET Orchestra, Elmira Darvarova. The disc showcases the music of two European Baroque masters who reached their artistic zenith outside of their native countries in London: Georg Frideric Handel, a giant among Baroque composers, and François-Hippolyte Barthélemon, a French violinist of the generation after Handel who counted Haydn among his friends and colleagues.

Handel • Barthélemon | European Baroque Masters in London is scheduled for release in July 2013 and will be distributed in the US and Canada through E One Entertainment.