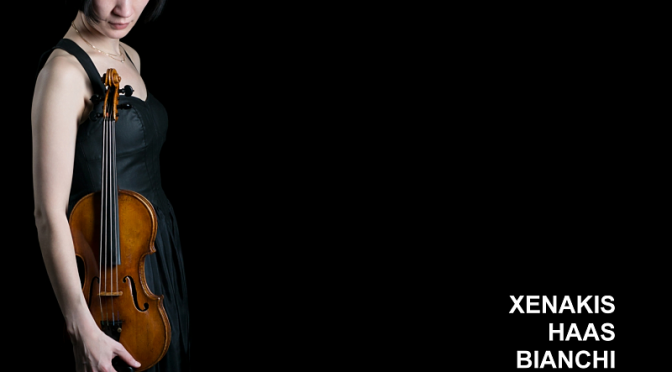 This album ventures into regions of the art of violin-playing the significance of which is now becoming clear. Devoted entirely to microtonal compositions for violin and pieces for violin with electronics, this CD explores works of seven composers who have been challenged by these areas of discovery to create intriguingly fresh and surprising sound worlds.

Since turning much attention in recent years to the music being written in my own time, I have found it fascinating to explore certain areas of experimentation that have taken my instrument beyond the familiar glories of its heritage. One of these is the use of microtonality- a system of intervals involving distances smaller than the half-step (the keys on a piano). I have been intrigued by both the physical aspects of working with such intervals, and the idiosyncratic ways in which composers use such intervals for their own expressive aims. Another interest has been noise- that is, non-pitched sounds, often percussive or abrasive, produced by unusual techniques on the instrument. A third area I’ve been eager to explore has been music involving electronics. Since electronic music’s beginnings, using spliced reel-to-reel tapes decades ago, the possibilities of the technology have exploded so that there are numerous ways in which to create or generate sounds and to interact, as a live performer, with them. This has led to a palette of sound possibilities and a degree of agility of response often not offered by traditional instruments.

Miranda Cuckson is the leading exponent of new music for the violin on this side of the Atlantic, and is beginning to make waves as well in Europe. Her two previous recordings for Urlicht AudioVisual, featuring some of the most demanding modern-era works for violin by Luigi Nono, Elliott Carter, Roger Sessions, and Jason Eckardt, have met with unanimous critical acclaim from the music press.