“Abas pretty much is calling the shots here, and what he produces is unlike any other recording of the Brahms Piano Concerto No. 1 in D minor, Op. 15, you’ve ever heard. You can dive in pretty much anywhere, but try the opening movement, where Abas careens through startling contrasts, imperious gestures, and generally extreme phrasing. You might object that this isn’t Brahms, but rather Liszt experimenting with a slightly more classical approach to form. Yet Abas is clearly a highly charismatic player, and there is absolutely no possibility of boredom here.”
— James Manheim, All Music Guide 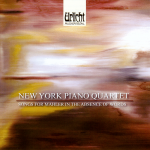 When I heard this program presented during the 2011 New York Chamber Music Festival, in honor of the centenary of Gustav Mahler‘s death, I knew it had to be recorded. The New York Piano Quartet brought the sort of urgency to Mahler’s earliest surviving work, the opening movement of what was to be a longer Quartet for Piano and Strings, that has eluded every other performance and recording of this work that I have heard. Three distinctly different realizations of Mahler’s sketches for what was to be the quartet’s second movement are also featured — a completion in the grand romantic style by Enguerrand-Friedrich Luhl, the angular, almost expressionist movement by Soviet master Alfred Schnittke, and Gernot Wolfgang‘s jazz-infused From Vienna With Love. The program also includes works commissioned for the concert in remarkably divergent styles by Wang Jie, Cristina Spinei, Barney Johnson, Noel Zahler, Patricia Leonard, and Nicolas Prada. The players and I have dedicated this recording to author and critic Norman Lebrecht, an indefatigable champion of Mahler’s music.

Songs for Mahler in the Absence of Words 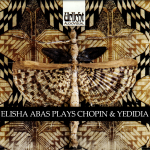 “Elisha Abas is an absolutely fearless musician. His daring approach to music of the Romantic era recalls many stylistic touches of the great pianists of the early 20th century — Ignaz Friedman, Josef Hofmann, and of course Elisha’s first great mentor, the legendary Artur Rubinstein — but who finds the poignancy and poetry that speaks to a turbulent world and culture. His uncanny ability to communicate directly with his audience through music and talent for honing in on the emotional and expressive underpinnings of music led me to invite him to record for Urlicht AudioVisual. I am very proud of my association with and am humbled by the talent of this great artist.”

That was the reaction of not one but two friends in the music business when I told them late last year that I planned to start a record label. “Sales are tanking… the business model is in meltdown… and did I mention the economy is a train wreck?”

Yes, yes, and yes — which is why I feel now is the right time to launch Urlicht AudioVisual.

Sales of physical product are not doing comparatively well — if you’re a major label like Sony or EMI. Indie classical labels have advantages — they are more connected with their audience, they are not encumbered by the dictates of the major labels’ clueless distribution divisions, and they understand the power of direct downloads. Indies now rule the roost when it comes to classical music. I’ve opted to partner with two companies — E One Entertainment for traditional physical distribution and meyefi.com for downloads — that are navigating the changing business model with insight and aplomb. And, being ever the optimist, the only direction in which I see the economy going is up.

Urlicht AudioVisual will focus on daring artists with a strong interpretive point of view.

Pianist Elisha Abas, whose playing is strongly influenced by Ignaz Friedman, Josef Hofmann, and other great romantic virtuoso pianists, brings a bold, new direction to a cornerstone of the romantic repertoire, Brahms’ Piano Concerto No. 1, in a performance that has the feel of a large-scale “symphonic poem.”

I’ve been mightily impressed by the New York Chamber Music Festival and its core ensemble, the New York Piano Quartet — pianist Linda Hall, violinist Elmira Darvarova (the driving force behind the festival), violist Ronald Carbone, and cellist Samuel Magill, all of whom have been members of the Metropolitan Opera Orchestra. Toward the end of last year’s festival, Elmira and I talked about recording one of their programs. Instead, we did two: “Songs for Mahler in the Absence of Words”, centered around Mahler’s very early movement for piano quartet and sketches for a scherzo (this disc features seven world premiere recordings by a variety of impressive composers), and a second disc coupling two formidably challenging works by Joseph Marx and Erich Wolfgang Korngold.

On September 12, the New York Chamber Music Festival will hold an informal label launch party following the NYPQ’s performance of the Marx and Korngold works, plus Gernot Wolfgang’s From Vienna with Love (featured on the “Songs for Mahler” CD) at Symphony Space. I hope you can join us! 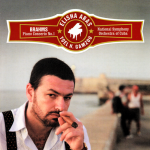